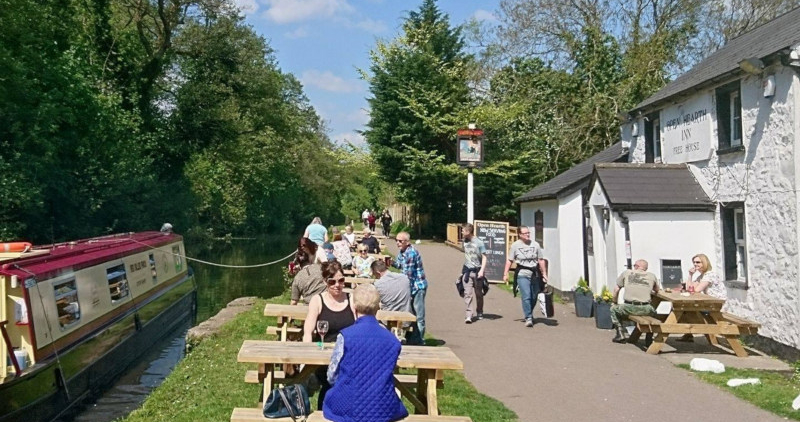 The Bridge 46 Facebook group has issued a press release:

The Facebook group “Bridge 46 to Five Locks” have commissioned a brand-new Boater’s Signing Book to be made. The Facebook group was initiated in August 2020 to bring pressure to bear on both the Developers of the new housing estate at Bevan’s Lane and the Local Authority, Torfaen County Borough Council to keep the integrity of the canal intact, maintain the towpath and restore navigation under Bridge 46 to Five Locks. The Facebook Group now has over 2,500 members from all over the world who are all canal lovers and fans of the beautiful Mon & Brec Canal.

Spokesperson for the Bridge 46 to Five Locks group Mark Sullivan said “Reinstating this old tradition of signing the Boater’s Book is another step in raising even more awareness of the beauty of the Monmouthshire & Brecon Canal here at the Southern end. We are very proud to have this magnificent canal running through the heart of Torfaen. Through the combined efforts of everyone involved, the canal can be nurtured back to life and its full potential reached and respected. With this book, we hope will come a new, clearer strategy to help maintain this wonderful green corridor within the reach of all within Torfaen. We thank wholeheartedly those that have joined us and those that have supported us over the last 11 months. We all look forward to seeing our aims achieved with all of you on board and get navigation restored to Five Locks and potentially, who knows how far beyond “.

“The Bridge 46 Facebook Group have played a leading role in highlighting the very long delay in returning the canal south of Bridge 46 to navigation with the resultant detrimental effect on the canal environment. Our Trust also welcomes their recent initiative to re-instate the Boaters’ Signing Book tradition and hope that this will encourage more boaters to explore the southern section of the canal”